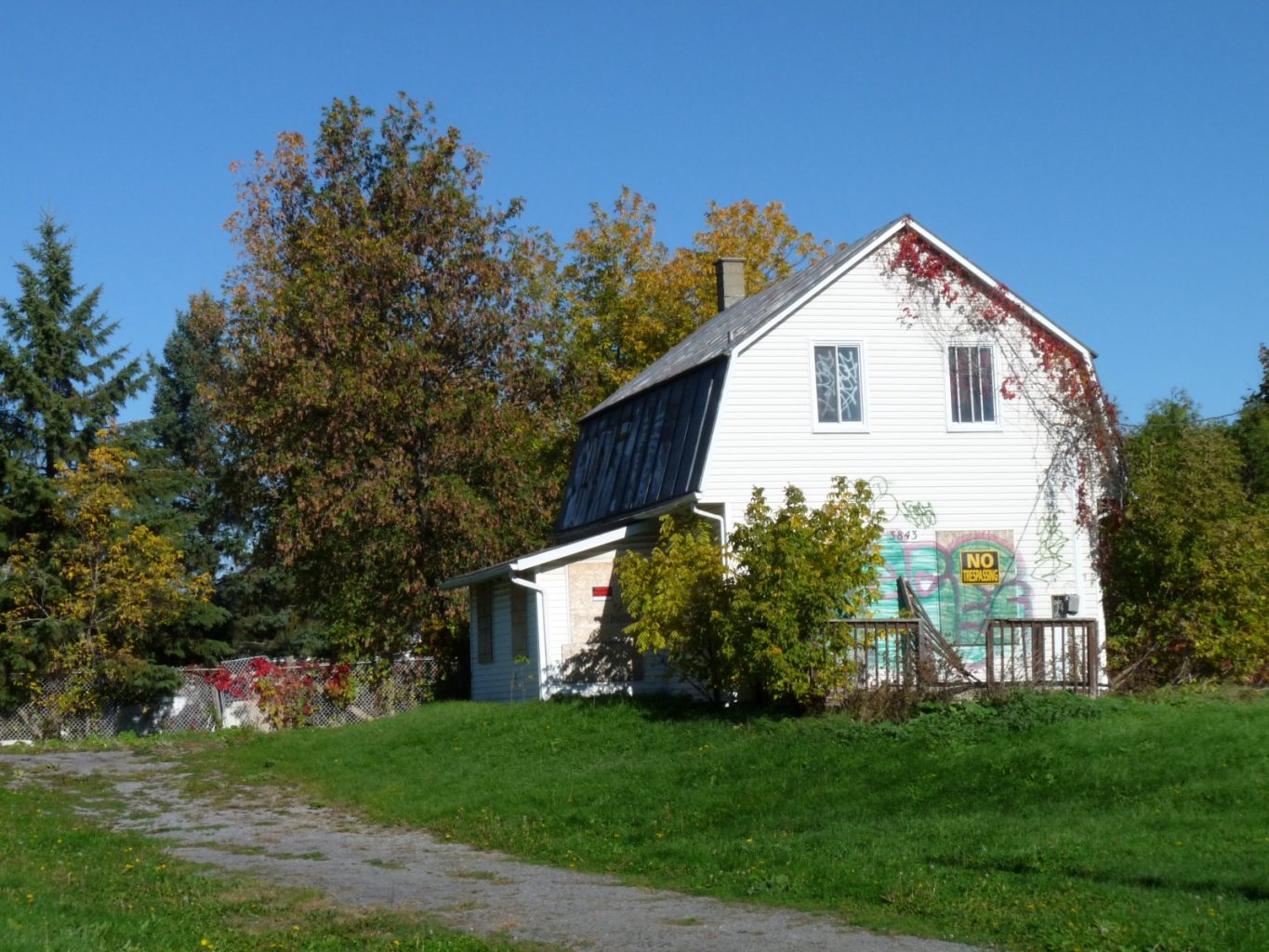 Single family residence built in the early 1930s. Rectangular in shape, it has a gambrel roof, symmetrical windows and door openings on the facade with the main entrance at the front.  The house was built of wooden boards with a tin roof and a small veranda to the left of the main door.  Inside, there was the main entrance, a hallway leading to the kitchen at the back of the house as well as a living room on the right.  A wooden staircase along the exterior wall of the hallway led to the second floor where there were two bedrooms and a half and a bathroom with a mansard roof.  The basement was high enough to allow a person to stand up but it had an earthen floor.  Similarly, to many houses built in those days, the basement had a cistern for collecting rainwater used to water the garden.

At one time, the exterior walls of the house were covered with sheets of red brick veneer.  Most of the land on this fifty-acre property was used for farming. There was also a wooden barn and some sheds.  One shed was used as a slaughterhouse for pigs and a second one as a slaughterhouse for other animals such as cattle, poultry, etc.  On the left side, in front of the house, one could find an orchard and two beautiful tall trees.

This house was built on Innes Road formerly known as Saint-François Road.  Nowadays, one can still see a small house covered with red brick veneer burnished by time. It seems to be erected on the ruins of the first squared-timber house built before the 1930s.

Around 1930, the property belonged to Mr. Bazinet. It was then sold to Félix Dumas, owner of a store and a restaurant located on the corner of 10th Line and Innes Road. It was the tradition, especially in those days, that fathers set up their sons in life. That is why René Dumas’ father bought him this land when he married Blanche Taillefer on July 6th in 1932.  She was the daughter of Isaïe Taillefer and Anésie Bazinet.

René always earned his living as a meat merchant.  He was always going to livestock auctions to either buy or sell animals.  Over the summer, he worked in his garden and sold vegetables from his garden as well as the fruit from his orchard.

In 1953, René opened a convenience store which included a butcher shop.  It was located at the corner of Innes Road and Belcourt Boulevard.  Nowadays, that section of Belcourt Boulevard is known as Frank Bender Street.

During the 1960s, René subdivided his land to develop four new streets: Dumas, Benoît, Drolet and Leblond, all located west of Frank Bender Road.  Then, he subdivided the land along Frank Bender Street and sold these lots.

Of the original 50 acres of land, the little house is located on a portion of about 3 acres of land.  It has now been sold to a developer from Toronto.

The following owners that have come and gone till today are:

And finally, Hélène Parisien Brault-Beaulac who gave it to her parents, Armand Parisien and Marie-Rose Lacroix.  The couple lived there until M. Parisien’s death in 2003.

Due to large ravines that divide the landscape of our region, Frank Bender Road is not located where it was supposed to be.  In fact, it replaces Mer Bleue Road which was supposed to continue straight through to Saint-Joseph Boulevard or rather Notre-Dame Street. That is to say, as far as the First Concession.  There was even a time when Mer Bleue Road extended as far as Jeanne d’Arc Road before turning to the west in order to avoid a huge ravine located at the end of Eugène Delorme’s property. Mer Bleue continued on to reach Belcourt Street formally called the “Montée Montpetit”.

An aerial photograph was probably taken by the Gloucester Township who had decided to map out a road that crossed René Dumas’ land in order to straighten the road between Innes and Saint-Joseph Boulevard. This initiative proved beneficial to René Dumas since he could then subdivide the majority of his land and sell those lots along Frank Bender Road.

For the residents of the Third and Fourth Concessions, this property was very popular as they used this road either to get to the church, the general store, the post office or the bank which were all located in the heart of the village.