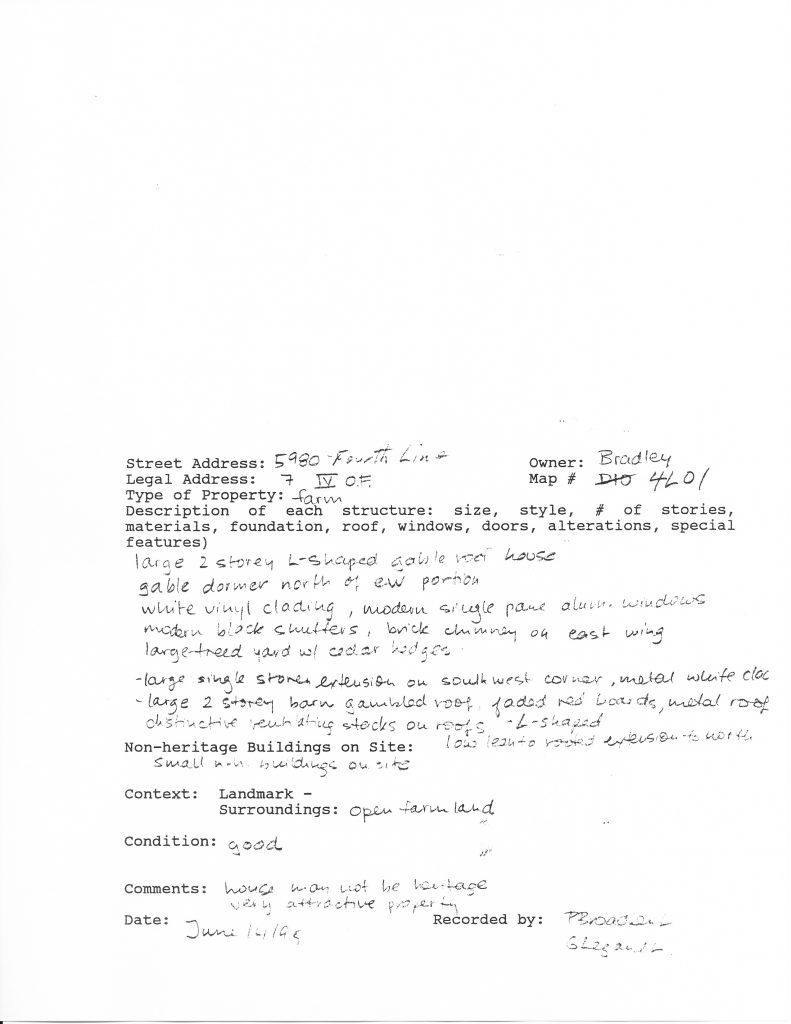 Large farmhouse on 200 acres of land. This house has been demolished.

William Bradley, the eldest son of Joshua Bradley and Lucinda Clark, originally from Northern Ireland. He married Charlotte Morris, and in 1878 came to Canada and settled on Lot 7 in the 4th Concession of Gloucester. Although they had 14 children, 11 boys and 3 girls, only William Albert, married to Marian Rathwell, remained on his father’s land with their 3 children, George, Lola, and Edna.

George’s three sons, Harold, Keith, and Wayne, became joint owners while leaving a piece of land to their sister Marion to build her house. Following the creation of the Greenbelt, the farm was purchased by the National Capital Commission.

Large two-storey, L-shaped farmhouse with gable roofs joined at right angles. The north side portion of the roof had a dormer window and the other single-paned windows were made of aluminium and were lined with black awnings. The outside walls of the house, as well as an extension added on the southwest corner, were clad in white vinyl.

The property was beautifully landscaped with a large yard surrounded by a cedar hedge.

In the courtyard, there was a large two-storey barn with a gable roof finished in red painted wooden planks that had faded with time. On the roof, there were also vents over each of the two hay “lofts,” a term used by farmers.

There are many Bradley families in America. They came from Ireland, Scotland, and England. Although Joshua’s children preferred Western Canada, the three children who remained in the region played an important role in the community.

Joshua owned a tannery on the corner of Lot 9 and Blackburn Road. He lobbied authorities to name the new location “Blackburn Hamlet” in honour of Sir Robert Blackburn of Edinburgh, an influential man in the country’s affairs. He also joined the residents in supporting their claim to obtain a post office.

One of William’s granddaughters, Elizabeth Bradley, taught at the English school on Ogilvie Road from 1926 to 1929.

Since 1965, Bradley descendants have been part of the Consortium for School Transportation Ottawa (CTSO) located on Frank Kenny Road in Navan.

Another Bradley descendant settled in Navan and owns the village corner store.

The Bradley farm was one of the beautiful farms on Renaud Road. It was well maintained and attracted developers such as Valecraft Homes Ltd., who founded a new house project called “Bradley Estates.” This house project grew very quickly, offering all modern services and allowing new residents to form a recreational association to the delight of people of all ages.

The Bradley Estates is so well situated in a picturesque landscape that it already offers much sought-after walking trails, cycling paths, and nature areas.